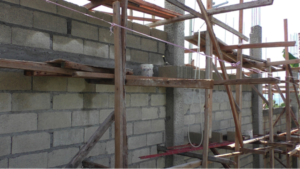 #GivingTuesday is a movement. It’s a way of giving that mobilizes the #globalvillage to which we all belong. Individuals, families, communities, and organizations unite to inspire philanthropy and generosity. My Refuge House invites you to participate and know that you make an impact.

Our 2018 #GivingTuesday Campaign will help fortify a safety wall at My Refuge House. Before we can provide emotional healing for our girls, we must first provide physical safety (Refuge). A section of our 20 ft. perimeter security wall is damaged from time and typhoons. The estimated cost for replacing and fortifying a section of the wall and a gate is $30,000. We NEED your help to cover these necessary costs. Through your generosity, you’ll provide a safe place of healing for the girls of MRH.

Between November 7th and November 27th, we are grateful to share a story from Jim Hammond (an MRH Restorer who lives in North Carolina) in short chapters each day on social media. We’ll share those same chapters in a series of three blog posts here, too. During this campaign, you are also encouraged to change your facebook profile picture (search for MyRefugeHouse at www.facebook.com/profilepicframes) and/or download and post your picture with one of our campaign posters (http://bit.ly/MRHRestorerPic).

Be inspired. Be unhindered. You are a #Restorer.

Chapter 1. In 2010, my family and I went to our church, Mecklenburg Community Church in Charlotte, NC, and were introduced to a new campaign that we would be undertaking. The campaign was called “Unhindered”, and it was focused on raising money to aid an organization in the Philippines that sought to restore girls rescued from the sex trafficking industry. It seemed that this organization was in need of money to purchase land upon which they would build a home for such girls. As our Pastor, Jim White, said at the time, “The idea that there are girls in need of rescue who cannot be recovered because there is nowhere for them to go is not acceptable, and we are going to do something about it.”

Chapter 2. The service was a moving one and featured a video of Gary Haugen from International Justice Mission detailing the extent of the sex trafficking problem. At the end, we were all given little rubber bracelets much like the “Livestrong” bracelets that were so popular at the time. They had the word “Unhindered” printed on them, and they were intended to remind us to pray for and be a part of the campaign.

Driving home from church that day, my wife, Elizabeth, noticed something was amiss. She knew that my mind was elsewhere as I drove us home solely from rote memory. She asked what I was thinking.

Chapter 3. I wore my bracelet everyday and wondered what this feeling was that was calling me toward a place, a people, and a cause that I knew nothing about. I prayed. I waited. The money was successfully raised and turned over to My Refuge House, but I still did not understand how to address this feeling that I had another job to do.

And then, she showed up…

Chapter 4. Jessica Kwon was the Director of Operations in the United States for My Refuge House, and she was sitting on the stage at our church being interviewed by our pastor about the plans for this money that we had raised. She showed us the land that had been purchased and shared concept drawings from the geniuses at Visioneering Studios that outlined a whole campus in Cebu. This seemed like a chance to chase down my feeling, so I approached her after the service and introduced myself.

Jessica told me that there was going to be a meeting immediately after church for people like me that had an interest in the mission of MRH. I told my wife to head on home since I (apparently) was going to a meeting.

Little did I know…

Chapter 5. When I arrived home, Elizabeth asked how the meeting went. I told her that I thought I had just signed up for a mission trip. As shocked as she was, I was 100% more surprised.

The meeting turned out to be for people who were exploring the possibility of going over to Cebu to help build the first house on the newly acquired land. Papers were passed around. I signed some. I think one of them committed me to the trip. I still can’t say for sure.

Chapter 6. Regardless, after a few months of meetings, I found myself not just a member of the team, but leading it. I had never been on an international mission trip in my life! This all happened so fast and so much of it seemed out of my hands. It was truly a leap of faith.

Chapter 7. While we were in Cebu, we donated some of our time and energy to the crew building the house. We hauled rocks, mixed concrete, hauled more rocks, dug some holes, and, look over there, more rocks to haul!

The concrete was being poured into forms that would become the security wall. Unbeknownst to anyone, I peeled off my green “Unhindered” bracelet, tossed it into the concrete, covered it with another bucket of concrete, and said a prayer that it wouldn’t ruin the structural integrity of the wall and cause it to come crashing down. Luckily, it has not.

I wanted to leave a piece of me in that place that had taken up such a large part of my heart since I did not think that I would ever have cause to go back there.

Stay tuned for the rest of the story! Click here or below if you would like to help build safety and build lives as part of our #GivingTuesday campaign.

Give to 2018 MRH #GivingTuesday
A Drop For Your Bucket: The answer was always yes #Unhindered: Chapters 8-14
Scroll to top